1Y GB CMW.News: Probability of Death with COVID-19 for Male of specific Age, BMI and No Comorbidities
CMW.News: 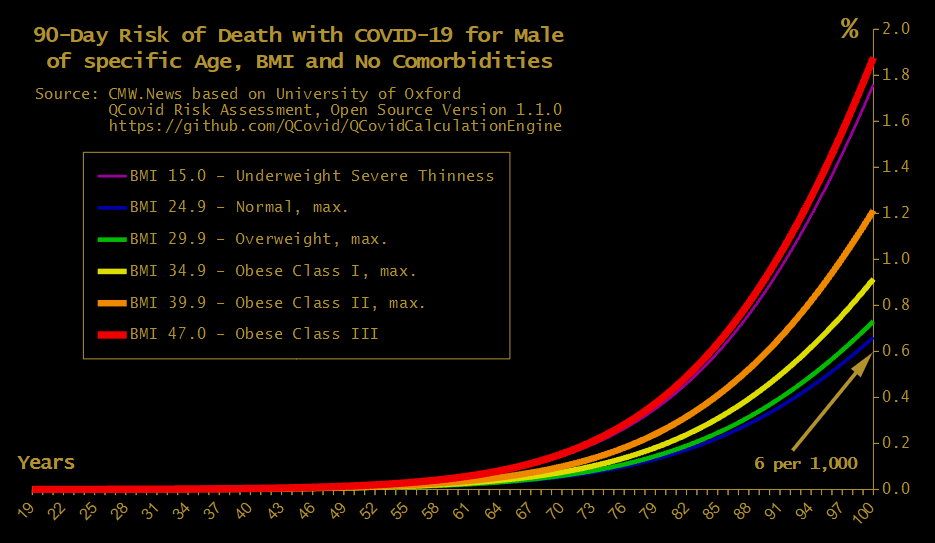 We've known since early 2020 that the chance of dying with COVID increases with age, obesity and medical conditions. The chart above and the two below are the first to graph probability of death by those factors.

All charts were produced from outputs of the University of Oxford's QCovid Risk Assessment algorithm developed in 2020. Researchers developed the algorithm using data from 6 million patients, and validated it with data from 2 million more. They published a paper on their work in the BMJ on 20 October 2020, and made the algorithm available online at qcovid.org by 19 December 2020 and at Github as Open Source Version 1.1.0 on 26 March 2021.

Recently, CMW.News checked that outputs of the algorithm from Github and the online QCovid risk calculator were consistent. Online inputs were Age (19 to 100), Sex (Male), Ethnicity (White British, White Irish or Other White background), height and weight (to calculate Body Mass Index, BMI, in kg/m^2), UK Postcode (blank). Remaining inputs related to comorbidities were Neither, None or No. Between 23 and 26 November, qcovid.org changed its online calculator. Spot checks of the new outputs showed a lower probability of death with COVID. More on this later.

The three charts presented here are therefore consistent with the online QCovid risk calculator available from 2020 to late November 2021, the Open Source Version 1.1.0 of the algorithm available in Github since March 2021, and the paper published by the BMJ in October 2020.

All the charts show that for a given age, probability of death with COVID is highest for the most obese (BMI of 47 is the maximum the algorithm allows). Those at the other end of the BMI spectrum, the most underweight, have only a slightly lower chance of death (BMI of 15 is the minimum it allows). The lowest probability is for a man with a BMI of around 25. For all ages, chance of death with COVID for a man of normal BMI is about a third that for a man with BMI of 47. 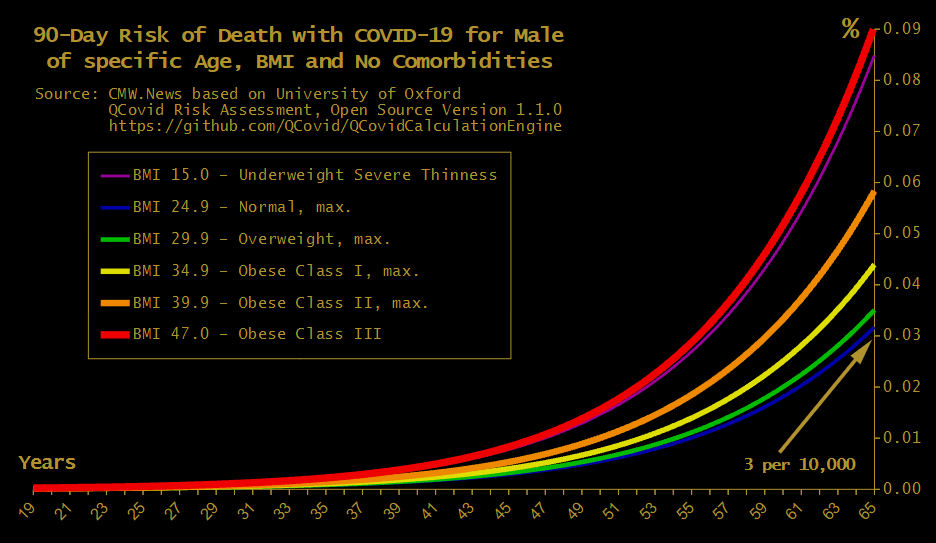 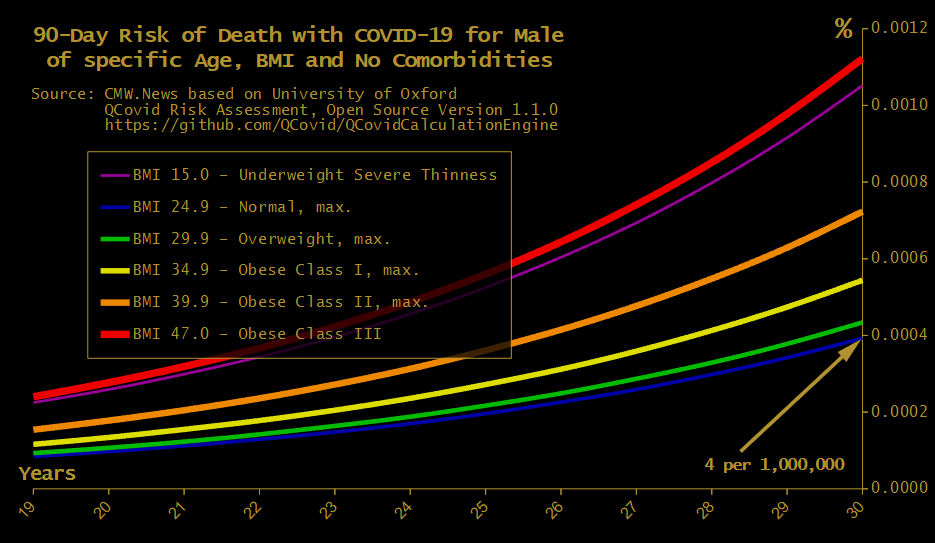 These probabilities are outputs of an algorithm developed in early 2020 and validated in mid-2020 based on patients in England. Is the chance of death with COVID now higher or lower than that shown by these charts?

Some COVID enthusiasts argue probabilities are higher due to the emergence of new variants. While the now-dominant Delta variant is more contagious, it is less lethal than the original virus. Maybe some future variants will be more lethal.

A stronger argument is that probabilities are lower, perhaps much lower, due to four reasons. (1) Many of those susceptible to dying with COVID have died. (2) The previously infected who survived now have natural immunity. (3) Deadly treatments used in 2020 such as invasive medical ventilation are less prevalent now. (4) Effective treatments developed over the last two years, including repurposing of existing medicines, reduce mortality of those with COVID.

For what its worth, spot checks of the new qcovid.org online risk calculator show lower "Risk of catching and dying from COVID-19" than did the 2020 version. Spot checks of the US equivalent from Johns Hopkins & University of Maryland likewise show lower probabilities of death with COVID.

Clear from both online calculators and charts is that COVID was never a real emergency for the population at large, not in 2020 and not now. This is especially so considering those not shown here: women (who on average have an even lower probability of death with COVID than men) and people under 19 (even lower chance of death than 19 year olds).

The charts should be taken as a baseline showing how probability of death with COVID for an obese or underweight man can be dramatically decreased by returning to a healthy weight. Probabilities can be further reduced by common sense treatments known in early 2020 such as increasing Vitamin D. That public health officials promoted neither early treatments nor healthy eating and exercise is a crime for which they must answer. In the meantime, the public needs to be shown probabilities of death with COVID such as those charted here so more people get a better understanding of how low the risks they face really are.