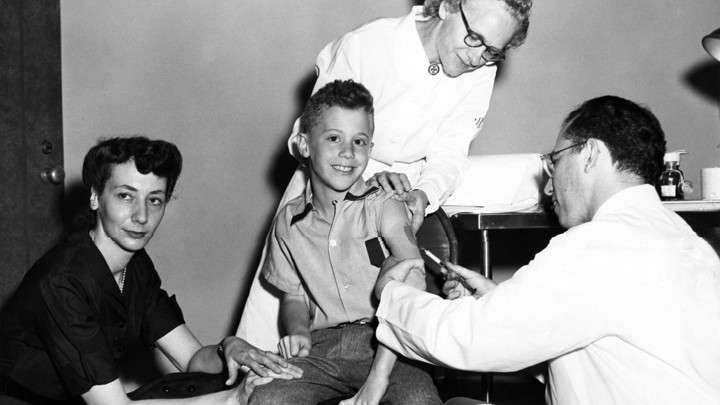 If you spend time on Twitter, you've likely seen tweets citing Polio vaccines in support of arguments for COVID injections and mandates. Their message: the Polio vaccine helped beat Polio in the 1950s, so shut up and take the COVID jab to help beat COVID now. But the message only works if you ignore stark differences in how the vaccines were developed, trialed, and used.

Dr. Jonas Salk's Polio vaccine was based on the long-proven technology of inactivated vaccines. His vaccine was initially trialed in 1952 and 1953 with recipients including himself, his wife, his three young sons and 7,000 other children. [At top is a photo showing him vaccinating his oldest son Peter.] From 1954 into 1955 a larger trial was conducted on 1.83 million children.

In contrast, Pfizer's COVID vaccine was the first to be based on mRNA technology, and was trialed for just months on under 50,000 (0.05 million) people. Worse than the Pfizer trial being so underpowered is growing evidence that vaccine adverse events (AE) were deliberately excluded from its results.

It should therefore be no surprise that the Pfizer vaccine, authorized based on questionable trials, resulted in an unprecedented number of AEs. Thousands of deaths are recorded for the use of Pfizer in the central AE database in each of the US and EU. Because of known underreporting, unrecorded deaths in each of these markets are reasonably expected to be in the tens of thousands if not higher.

Contrast this to the response to AE deaths caused by problems with Salk's Polio vaccine. The immediate background:

Francis presented his [vaccine trial] report in Ann Arbor on April 12, 1955. After an evaluation of the report by a group of virologists, a license for sale of the Salk vaccine was signed by Mrs. Oveta Culp Hobby, the Secretary of Health, Education and Welfare.

The announcement of the success of the field trials led to great demand for the Salk vaccine. By the end of April 1955, around 5 million children had been inoculated with commercially produced Salk vaccine. Several commercial firms (besides Parke Davis and Lilly) manufactured the vaccine on a large scale -- a process which had begun even before the release of the Francis Report.

Some of the firms had difficulty in safely inactivating the polio virus. At the end of April 1955, a large batch of vaccine manufactured by Cutter Laboratories actually caused polio in 250 cases. The Cutter vaccine was taken off the market, although the general vaccination program continued. An investigation of the incident revealed problems in inactivation of the Mahoney strain of the virus. On the recommendation of John Enders and other virologists, U.S. Surgeon-General Leonard Scheele halted the vaccination program on May 7, 1955. After an in-depth investigation, Dr. Salk and a technical committee of virologists developed more stringent specifications for the manufacture of the vaccine. On May 27, 1955, the Surgeon-General announced that the vaccination program could be resumed.

In 1955, 250 cases caused 10 deaths and led to a rapid response by the vaccine developer, manufacturers and health authorities. This was with a death rate of 2 per million inoculations.

In 2021, Pfizer's death rate is 10 times higher (20 per million) assuming the central AE database in each of the US and EU accurately reflect total deaths, or at least 100 times higher using a reasonable assumption of unreported deaths. How can the lack of any response by Pfizer and authorities, let alone rapid response, be explained?

One explanation is that both Pfizer and heath authorities are protected from legal liability That means their financial downside is low while their upside depends only on the number of initial vaccines and subsequent boosters they have the credibility to push onto adults, adolescents and now children.

Another explanation is that vaccine developers and health authorities as well as media are "all in" on COVID vaccines. They have staked their credibility on the vaccines being "safe and effective" as their propaganda repeats ad nauseum. Illustrative of their extreme position is the fact-check headline from the Poynter Institute for Media Studies: "There's no evidence that the Pfizer vaccine causes deaths". Is it likely that Poynter doesn't know the meaning of "no evidence"?

But Poynter's "no evidence" position is just as extreme, just as dogmatic, as that of the most senior US health bureaucrat, Anthony Fauci, who continues to claim his bureaucracy didn't fund gain-of-function research at the Wuhan Institute of Virology. Neither can admit what the evidence shows without destroying their credibility. They can't even admit there may be such evidence on gain-of-function and vaccines without jeopardizing their credibility. The same applies to lockdowns, masks, and differences tabled below between Salk's Polio vaccine in the 1950s and Pfizer's COVID vaccine now.